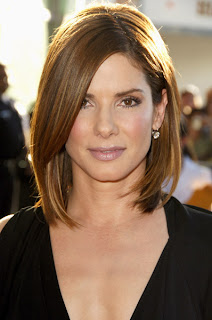 SANDRA BULLOCK’S CHART –by Zoe Moon
Sandra is experiencing Uranus squaring her Ascendant right now. What does that mean? Uranus is the energy of shock, genius, brilliance, change, revolution, surprise, independence, freedom, and it turns things upside down when its energy is locking onto something in a chart. The Ascendant is the Rising Degree, or in other words, it represents Sandra’s identity, body, image or ego needs. The square is a challenge. Uranus is in her Midheaven, the zenith of the chart where career is affected and the spotlight makes things that happen become publicly known.
Since Uranus takes about 84 years to move around the chart, it will be about another 42 years before she experiences this combination again and at that time it will be coming from the other side of her chart. Uranus square Ascendant means sudden separations. Why? Because in this position it is exactly halfway in between her rising and her marriage house door, or in other words, Uranus is right now sitting half way in between her and her husband.

This moment when it happens in a chart, once every 42 years, is responsible for ousting relationships or turning them upside down like a flash from the darkness, at the least expected moment or it can introduce something outside the norm or unusual or liberating into the union. It doesn’t have to mean a complete break-up but it is going to rattle the cage. Uranus moves slowly so when the degree becomes perfect or is hit like it was this week by transiting planets, then life hits the fan.
This began for Sandra, it entered into the degree that formed the challenging square, in May of 2009, I would assume around the time this woman is alleging she began seeing Sandra’s husband. The aspect is about mid way now and will not conclude until January of 2011. Like I said, the energy is slow moving but the effects are lightning like. It is no surprise that in this week with the Sun and Mercury both coming to the same degree with Uranus by transit up in the sky, and it happening in her Midheaven for all the world to see, that we the public at large would all be finding out about it now. The light is almost overwhelming at this point in her chart right now.
Jupiter is offering some pretty major protection for her in this as he is on a once in 12 year cycle through her Midheaven as well (partly the combo that brought the lucky spotlight on her career this year) so should she choose to find a way back she could. If she chooses to move forward she should have plenty of support from the universe about now. It is just interesting to see how these influences conspire at certain times, it is not an evil influence, it is about shaking something up that needed to be unlocked and in so doing should help to free her in a way that is necessary to her own happiness. So as terrible as it appears in the moment, there is something bigger at work.
They say that when Uranus is in the Midheaven you can become famous over night, invent something revolutionary or win the lotto (or Oscar), that lightning can strike in amazing ways, or that you can have just as sudden of a fall from heights. She is an example of how this works. So many people genuinely love her, myself included, and she remains a class act in all she does so we can wish her the very best in this destabilizing moment in her life.
Other contributing factors:
By progression the ruler of her marriage house, Jupiter, (ie: the husband) has moved onto the ill-fated fixed star algol, where one loses one’s head either literally or figuratively. This would represent her husband and it does seem as though this is something he has done. It is in the house of secrets and self-undoing so yes, again, it fits.

Her progressed South Node which represents the arena of loss or karma sits in her marriage house and at this exact time in her life is at 28.25 degrees, the same exact degree of her birth Mercury by trine at 28.25 Leo. So we have a lock on a karmic moment that will represent some type of loss or limits from the marriage partner or if she were single, the meeting of someone karmic, and with Mercury the activator it is all about news, people talking, a decision, finding out. Mercury in Leo means the news is going to affect her love life, a child or a creative project, so this fits. Her birth Mercury sits with the Royal star Regulus which means Raphael works through this moment and that although, once again, as horrible as this must be for her and her marriage, the angle being activated promises something good comes from this, a better understanding or more loving communication, something involving a decision surrounding love or a child that will in some way be an important moment for her personally. If it is written in the chart then there is something more than what we are seeing to the scheme behind the design.
Her Moon has progressed to 3.24 degrees of Scorpio (sign of obsessions and triangles) in her 5th house of true love. Here it trines her Saturn and Midheaven degrees, both at 3+ in Pisces. So we know that emotions are running incredibly deep for her but are being sat on a bit (Saturn) to deal with the public (Midheaven). The trine once again will help her to come to a decision that is positive for herself and her standing in the life she has built and shows public support for her. The Moon is squaring her Sun by progression which means that she is most likely shaken emotionally over feelings of value and self-worth and will need to challenge herself not to go there. Let’s hope everyone pouring their love towards her will help on that level.
There are always so many keys that lock into place at a moment like this in a chart and I wanted to share it with you since I do think it teaches us something about the grand design of our personal energy patterns. It is why I think it is so important not to armchair judge the situation since what someone may draw into their lives or need to overcome is a very personal grail quest and one that sometimes even the person on the journey is just figuring out as they go. This particular relationship affected me, I just found it very touching the way she spoke so openly about her deep love for her man and how he teared up in pride over her accomplishments, I wanted it to work. Now I wish them the best in finding happy days again.
ZOE MOON ASTROLOGY COPYRIGHT 2010 ALL RIGHTS RESERVED
Posted by Zoe Moon Astrology at 1:34 AM